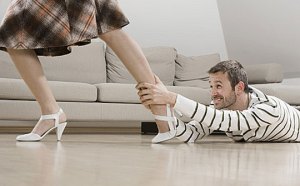 Guys, I’m not afraid to admit that I’ve been that girl. You know, the super clingy and emotional one. Everyone has at some point, even if you’re not willing to admit it. It happens to the best of us. I’m mostly a reformed clinger — I only get super crazy on occasion — so there’s this one thing I do that makes it somewhat okay: I generally keep it to myself. I know most of you are probably like, what’s the fun in being crazy emotional and super clingy if the guy you’re dating has no idea?

If you’re like me and freak out about the little stuff that really doesn’t matter, trust me. What he doesn’t know right now won’t hurt him, especially if you’ve only gone out a few times.

Regardless, my experiences with being clingy have left me somewhat jaded. When starting to date someone new, I make sure I keep my tendencies to cling in check (see: my general rules for texting men), and I absolutely do not put up with clingy-ness on their end. To be quite frank, I get annoyed when:

Thus, I have composed a quick guide on the general situations in which it absolutely inappropriate to be clingy and emotional, as follows:

Okay. It’s story time. Every guy from my 3 date weekend extravaganza is officially out of the running, which I could honestly care less about. I told my mom the basic premise of this story, and she informed me that the title of my book, which I will be writing, has to be “Gotta Kiss A Lot Of Frogs, I Guess” — the problem is that I haven’t even kissed any of these guys! My experiences have just been that awful that I haven’t even risked it.

Unfortunately, in this post we say goodbye to D (Date #2, who actually might have had some potential), who after 2 dates revealed that he was just a little bit crazy. My take on this whole situation: thankfully it happened sooner rather than later, and thankfully I didn’t have to have the “we’re not exclusive” talk with him — I’m sure he might have cried.

D started texting me yesterday, asking how my weekend was and what the rest of my week looked like, obviously scoping out whether we could make plans. I told him that I was busy on Monday and Tuesday, but I wasn’t sure about the rest of the week.

He told me he was going to back off.

I replied saying it was okay, meaning that he didn’t need to back off, but he took it as me saying “it’s okay that you want to back off, I’m fine with that.”

He replied and said “No, it’s not okay. I will back off. Take care”

Thinking he wanted an excuse to back off (and not really caring all that much about the situation), I replied: “Okay, you too then.”

Apparently, my indifference to thinking he wanted to back off (which was actually him thinking that I wanted him to back off) sparked a nearly hour-long back-and-forth conversation in which he misunderstood nearly everything I said, got super crazy, and whined. A lot.

I told him I didn’t really know what I wanted, and that wasn’t fair to him, so I didn’t want him to feel like he was wasting his time (he previously had informed me that he was outright looking for a relationship, whereas I’m just becoming comfortable with casually dating and don’t necessarily want to commit to someone at the moment).

He said that he didn’t think we should give up on what ever relationship we had started, so I asked him if we could get to know each other as friends. He told me that he’d be fine with friends, but if something else happened he wouldn’t stop it (which pretty much defeats the purpose of being “just friends” with someone.)

The conversation should have ended after this exchange:

I won’t bother you anymore. I’m sorry I too wasted your time. This was just a bad weekend to get into this conversation. That’s my fault. You are a very nice person. Smart and funny. I hope you find what you are looking for. I also hope you find the right career. I’m sorry I had a connection with you…from now on I will be much more guarded and secluded. Even though I only met you twice I feel I told you more than more know in a year 🙂 Strange how that works, that’s what I get for being me

Okay, it was really nice to have met you. I think you’re a good guy so I hope you find what you’re looking for as well. Take care 🙂

He then texted me a text informing me that I chose a “safe answer” and was lying, because if he was such a good guy then I wouldn’t just let him go. He asked why I had to be so nice and so funny and so smart, and said that just made things so much harder. To top it off, he told me to tell him that “I had no feelings at all, even hidden ones.”

So I did. It didn’t stop there! Seriously!

He said (because I told him I didn’t get why he was freaking out, we’ve only been on two dates):

Freak out, really? It’s called honesty and if you knew my past you would know the words just friends don’t sit well with me. Do I have them? Yes but I just don’t like the label. I’m sure you think I’m crazy now and that’s fine. I can’t change the past of what you think of me. I told you we could be friends but to me friends don’t mean it can’t be something more someday.

Turns out, all he really wanted from this conversation was to tell me about his bad day, and I told him that for future advice, he could have just asked me, and once it’s not bothering him as much, perhaps he could tell me.

He asked: “So I haven’t screwed up totally?” Feeling like I had somewhat kicked a puppy, I said no, not completely, but that it would probably be best if we didn’t talk for awhile.

He tried to quantify “awhile” — “that’s just an easy way for us to go our separate ways, when you say awhile what do you mean, days, weeks, months?”

When I didn’t respond after 2 minutes, he goes: “If you truly have no desire to talk to me again or hang out, I’d rather you just tell me. That’s all I’m saying.”

…you would have seized that opportunity. Be honest. You would have. I did. I told him we should just go our separate ways.

His response: “Ok not sure why you gave me false hope typical Good Bye”

…thank goodness. A note to all of my future suitors, please please please NEVER, under any circumstances, act like this guy. That’s all.

7 thoughts on “When to Not Act Clingy and Emotional: A Quick Guide + A Story!”